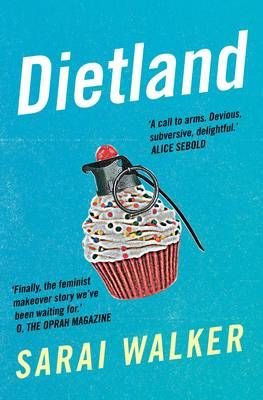 I’m really enjoying the surge of feminist novels of the last couple of years; in fact, I first became aware of this novel through Louise O’Neill, herself a writer of dark feminist literature.

The novel tells the story of Plum, a woman trapped in her body and her life. At a point where she has struggled with her weight all her life, Plum has decided to resort to weight-loss surgery and is counting down the days. Her plans go awry when she meets the mysterious Leeta, a stalker-turned-saviour who introduces Plum to a group of women determined to help her see herself not just as a thin woman trapped in a fat woman’s body, but as a valuable woman in her own right trapped in a patriarchal society. In addition to this, there is a side plot about a terrorist organisation called ‘Jennifer’, wreaking revenge on rapists, murderers and sexist media (a knowing nod to Page 3 and The Sun features.) It’s a complex novel- conspiracy theories nestle next to makeovers and characters that sometimes feel more like caricatures- but it’s a hugely enjoyable one that  I found hard to put down.

Before I read the book, I thought it was a YA novel, but it isn’t- although it is a coming of age and acceptance story. It’s a fascinating look at how society shapes us and the ways in which we might attempt to wrest back control of the way we see ourselves in a world that is still hugely stacked against women. Plum is an interesting heroine and one that I didn’t initially warm to; she’s prickly and sometimes exasperating. However, I was happy to see how her character develops in uncomfortable situations- and maybe I felt the way I did because I saw a little of myself in her apathy. After all, many of us subconsciously allow ourselves to be shaped by what we see everyday without challenging it. It’s not easy to fight the status quo. Maybe this novel will go some way to changing this.

(I read recently that the novel had been picked up for a TV series, so it will be interesting to see how it all translates to the screen.)