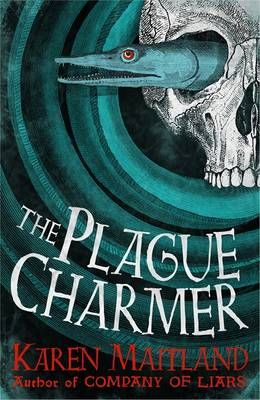 My love for Karen Maitland’s work is well-documented and so OBVIOUSLY I was delighted when her latest novel, The Plague Charmer, arrived as a surprise on my doorstep. I was even more excited when I realised that a quote from this ACTUAL BLOG was included in the ‘Praise for The Raven’s Head’ section at the start of the book. (Seriously. I actually screamed when I saw it and made Benn jump.)

Like most of Maitland’s work, the novel is set in the Middle Ages- in this case, the time of the Black Death. A mysterious woman washes up on the coast and brings with her a deadly warning: sacrifice a child, or the plague will come to the fishing village. After the villagers obviously turn down her offer, the woman disappears and illness is left in her wake. Two young boys are at the mercy of a religious, end-of-days cult. Meanwhile, a young aristocratic mother is struggling to hide her illegitimate son up at the manor house. (#itscomplicated)

With the story, as usual, told from the point of view of different characters- a former court dwarf, made the way he is by a cruel first master; a religious zealot who may or may not have a dark secret and a poisonous mind; a mother who is looking for her sons; and the mysterious Janiveer, the woman washed up- you see the story from all angles. This means that there are lots of subplots, some more successful than others. However, the story itself is vast and it’s easy to get caught up in the action. Maitland has a knack of making the world in her novels feel real and there were times when I felt my emotions were on a rollercoaster. Which was quite good, because I was unable to sleep anyway, so the book gave me a legitimate excuse as to why I had to stay up.

The Plague Charmer will be a must-read for fans of Maitland’s previous work and anyone who fancies a historical page turner with elements of fantasy. Definitely a book to keep you going through the upcoming long autumn evenings.