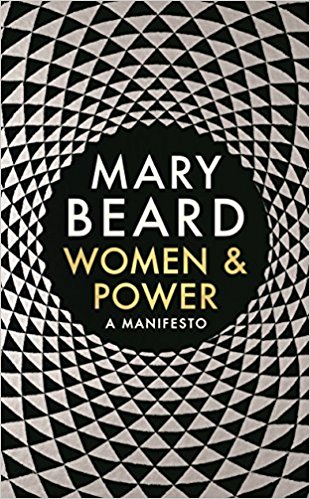 When it comes to Mary Beard, I am most definitely a fan girl. She has a talent for bringing the Classics to life in a way that’s relevant to readers (like me) with no particular background in history. With this small book, based on a series of lectures, Beard looks at the role of women in the ancient world and their modern counterparts.

It’s true that we have more freedoms now than our ancient sisters, but the restrictions- and expectations- placed on women clearly stem from ideas that the Greeks and Romans would have recognised. Beard uses the example of Telemacus, son of Penelope and Odysseus, telling his mother to shut up- and her doing so. This, argues Beard, is something that echoes down millennia to modern women: society likes women to be silent and, when they’re not, they’re shrill or masculine.

This book was written pre-#MeToo but post-Trump and clearly feels very relevant. How do we change ideas that have prevailed longer in Western cultures than almost anything? In a world where social media enables the darkest parts of society to spew horrific ideology and the leader of the free world sees nothing wrong with gross ‘locker room talk’ (AND STILL GETS ELECTED), it’s clearly a problem and Beard explores this with her no-nonsense common sense.

This is a small book, but one that has big messages that feel like they will only become more relevant as time goes on.