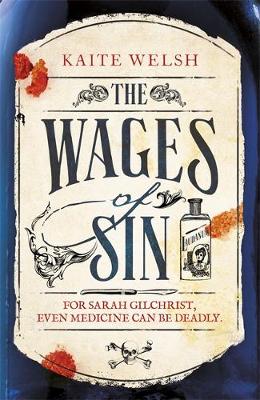 Sarah Gilchrist is a protagonist with ambition- a young woman sent to Edinburgh to study medicine in order to escape scandal (nevermind that a WOMAN studying MEDICINE at the end of the 19th Century is a scandal in itself, it’s a lesser sin to be a bluestocking than a man-eater, as is claimed in the rumours about her…) Whilst reluctantly living on the graciousness of her wealthy aunt and uncle, Sarah studies- battling the gauntlet of hostile male students and professors, as well as her gossipy fellow female students. Cut off from most of Edinbugh’s social world, she throws herself into helping the poor at a charity hospital.

It’s whilst there that she meets one of the city’s most vulnerable residents, a young girl called Lucy, who later turns up on Sarah’s anatomy table showing signs of a violent death. Troubled by this turn of events, she goes on a journey to explore just who killed Lucy and how she ended up as a medical specimen. Along the way, Sarah is unafraid to venture into brothels and opium dens, or to question the role her mysterious professor had in the girl’s demise.

As someone who loves Edinburgh, I enjoyed this book. At points it sort of reminded me a bit of a grown up version of Phillip Pullman’s The Ruby in the Smoke- a plucky young woman weaving in and out of the dangerous slums to find answers. It was a fun read, if a little predictable at points. This is the first instalment of a series, so if you like this sort of novel, there will be plenty more to come.